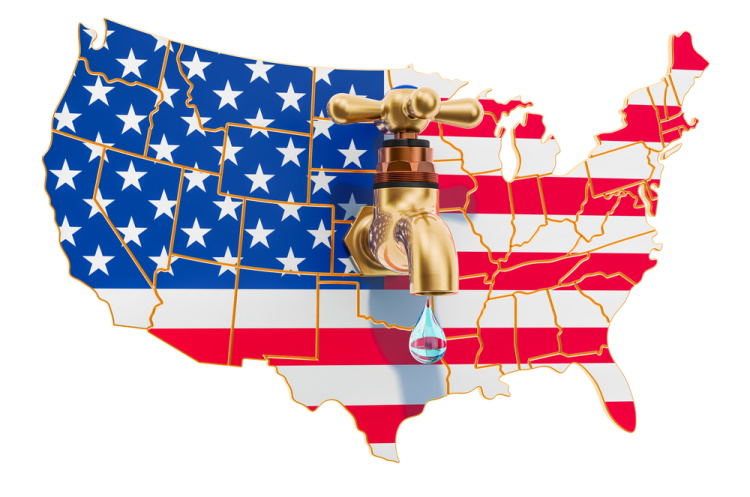 PFAS chemicals are used to manufacture numerous household and industrial products. Non-stick cookware and grease-proof packaging have identified as the main culprits. However, PFAS can be found in hundreds of products we use daily, including cosmetics and electronic components. It is also used for to make firefighting foam which is regularly used at airports and military bases.

PFAS Contamination in the US

Scientists first started observing the problem of PFAS water contamination in 2002. The Minnesota Pollution Control Agency (MPCA) were the first to investigate the effects of PFAS contamination. Since then, the Environmental Protection Agency (EPA) and the Center for Disease Control (CDC) have become involved in researching the dangers of PFAS in US water supplies.

Research into the effects of PFAS on the human body is growing, though a lot still needs to be learned. Waterborne PFAS has been identified as the main cause of health problems. By 2018, the EPA had identified 172 contaminated sites in 40 states. The Environmental Working Group (EWG), together with Northeastern University found PFAS contamination in 610 sites, affecting over 19-million people.

More recently, the EWG has posted a PFAS map on their website, indicating all known PFAS contaminated sites in the US. By October 2021, over 2,800 locations in 50 states have tested positive for PFAS.

Which Cities and States are Affected by PFAS

While it may be alarming to find that thousands of areas in all 50 states are affected by PFAS contamination, not all of these locations are at risk. Small amounts of PFAS (less than 70 parts per trillion) are deemed safe by the EPA.

So which states and cities are the worst affected by PFAS water contamination?

Michigan is at the top of the PFAS danger list, with 192 sites being identified as PFAS hotspots. In 2019, Kalamazoo county distributed bottled water in two communities because the municipal water supply was contaminated.

California has the second highest number of PFAS contaminated sites (47). New Jersey is another area where citizens need to be concerned, with 43 known sites.

When analyzing the US PFAS contamination map, the east coast shows an alarming number of contaminated areas, with New York, Connecticut, and Virgina being the worst. While many of these sites don’t have high concentrations of PFAS chemicals, people living in these areas should be cautious.

PFAS contamination is most prevalent around industrialized areas where these chemicals are used extensively. Airports and military bases are also high-risk areas due the regular use of firefighting foam in training exercises.

In states that are less industrialized, the problem is not as severe. The Midwest appears to be the region with the least amount of affected sites. Texas, Arkansas, Missouri, and Iowa, are also relatively safe. Though some areas in these states have low, moderate, and high levels of contamination.

Information regarding PFAS contamination in the US is constantly being updated and more sites are being identified. People should be vigilant and regularly check the progress of environmental impact studies to see if they live in an area where high levels of PFAS have been observed.

What Can you Do to Avoid PFAS Contamination?

If you live an area where PFAS has been identified as a health risk, you will naturally be concerned. Many have criticized the EPA for not doing enough to combat the problem of PFAS contamination in American water supplies.

In the end, we cannot rely on the government to ensure that our water is safe to drink. Progress in addressing the PFAS problem is slow, and the extent of the contamination is vast. Furthermore, the chemicals remain in the environment for a very long time, so it is not easy to address a pollution crisis that has been developing over the last 80-years.

We need to be proactive to protect ourselves and our families. The best way to ensure that we have safe drinking water in our homes is to use an appropriate water filter. PFAS contamination may be the biggest news at the moment, but there many other toxins that have been in our water for a long time. Chlorine, fluoride, pesticides, industrial solvents, and many other contaminants have long been issues that people are dealing with.

A good water filtration system can remove over 90% of these harmful contaminants from our water. A reverse osmosis membrane removes about 90% of PFAS from water, whereas carbon and ion exchange filters can remove up to 100% of PFAS.

Having your water tested is the best way to identify what contaminants are a problem for you. Knowing which toxins need to be removed from your water, will help you determine which would be the best filtration system for your home. A reverse osmosis filtration system with several stages is generally considered the best way to ensure that you have safe clean water in your home.