GenX is a trademark owned by Chemours, a spin-off of DuPont. It is a manufactured PFECA chemical used in many industries. The chemical is an organofluoride, known as hexafluoropropylene oxide dimer acid (HFPO-DA). It was developed by DuPont in 2009 to replace the toxic chemical Perfluorooctanoic acid (PFOA). Though recent testing has indicated that GenX chemicals have similar health risks to PFOA and may actually be more harmful to humans and animals. 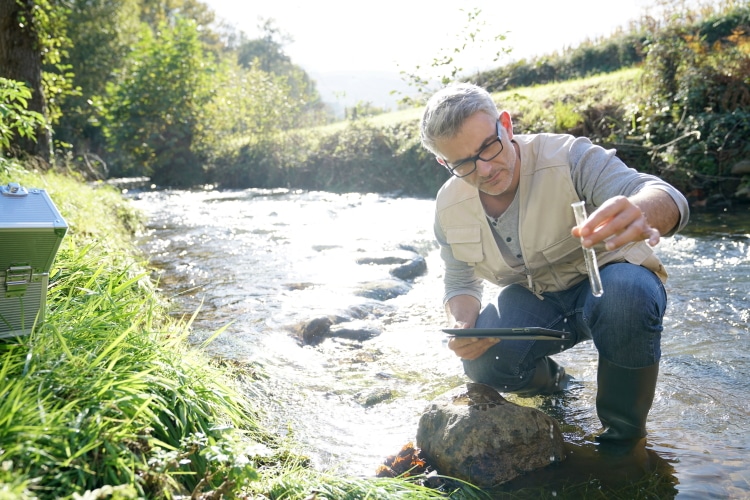 The science behind GenX chemicals may seem super-complicated, perhaps a little bewildering, at first. This article intends to debunk the mystery. We’ll be discussing the topic in detail so that you can understand what GenX chemicals are, where they come from, and what are the potential dangers.

Where Does GenX Come From?

GenX has been manufactured at the Chemours factory in Fayetteville, North Carolina, since 2009. It is a short-chain PFAS chemical. The carbon chain of PFAS determines how long it takes to break down, referred to as a half-life. Because GenX chemicals have a shorter carbon chain, they will break down faster than other types of PFAS. It is, therefore, a more environmentally friendly form of PFAS. However, it remains a hazardous contaminant, threatening the water supply in some areas.

GenX is also a byproduct of other manufacturing processes and may have been polluting the environment for a long time before it was officially recognized. Discharge of by-product GenX chemicals dates back as far as 1980, according to some DuPont plant officials.

In June 2017, Contaminants were discovered in drinking water supplied by the Cape Fear Public Utility Authority (CFPUA) and in the Cape Fear river. The source of contamination was found to be GenX chemicals manufactured at the Chemours factory.

The EPA tests, conducted between June 19 and July 3, 2017, discovered 15,250 to 21,760 parts per trillion (PPT) GenX chemicals on three different testing dates. The GenX chemicals discovered in the Cape Fear river could affect as many as 1.6 million people who are dependent on the river and surrounding wells for their water supply.

GenX chemicals are commonly used to manufacture high-performance polymers, like Teflon. These polymers are found in numerous products, including:

Since GenX and other types of PFAS chemicals are used in so many products that we all use every day, it is hard to imagine a world without them. GenX chemicals were developed in an attempt to alleviate the problems associated with PFAS chemicals. This would be the rate at which these chemicals break down.

PFAS takes more than 1,000 years to decompose, which is why they are commonly referred to as forever chemicals. While GenX chemicals are better for the environment because they have a shorter half-life, they have similar health effects to PFAS chemicals.

How Does GenX Get into Water?

According to EPA testing, GenX chemicals have the same effect on the human body as other PFOA alternatives. In laboratory testing on animals, it was found that these chemicals have negative effects on the immune system, liver, and kidneys. It has also been linked to thyroid problems and affects cholesterol levels.

GenX chemicals increase the risk of testicular, pancreatic, and kidney cancers. Pregnant women and children have an even greater risk, as the chemicals can cause fetal complications and affect breast milk production. Furthermore, it compromises the immunity system and may cause vaccinations in children to be ineffective.

Drinking GenX-contaminated water affects the hepatic, hematological, renal, reproductive, and immune systems. The safe dose for traditional PFOA in people is 20 ng/kg of body mass. Whereas GenX is only safe up to 3 ng/kg. Because it takes almost 7-times less GenX to cause health complications, it is far more dangerous than the chemicals it replaces.

Only a small amount of water contamination has a much greater effect on the people who drink that water. GenX also contaminates the air and soil. However, the greatest risk is from drinking contaminated water or eating fish that have been exposed to GenX contamination.

How Do You Remove GenX From Water

Despite efforts made by the North Carolina state authorities, Cape Fear Public Utility Authority, and the EPA, GenX contamination of the local water supply remains a problem. If you rely on water supplied by the Cape Fear river or get your drinking water from a well in the area, it would be advisable to use an appropriate water filtration system to ensure that your water is safe to drink.

There are three types of filtration that are highly effective at removing GenX and other types of PFAS from water.

Reverse Osmosis (RO) water filtration uses a dense membrane to capture contaminants and is generally considered to be the best type of filter for controlling most types of water contaminants. The toxins and debris that are removed are flushed from the membrane into a drain. An RO membrane is capable of removing around 90% of GenX and other PFAS chemicals. This may suffice for mild contamination but may not be safe for all situations.

The membrane also removes other chemicals, metals, and organic compounds. RO water filtration systems use the membrane in conjunction with other filters to ensure that any toxins which are not removed by the RO filter are removed in other stages of filtration.

RO filtration systems are fairly complicated to install. A smaller under-sink system can be installed in a cabinet below your sink. This will supply a designated faucet (or faucets) with filtered water. A whole house RO filtration system is installed to filter the main water supply entering your home. This ensures that all the water in your home is clean and pure.

RO water filtration systems do a lot more than remove harmful chemicals, like GenX. Depending on the stages of filtration, they can remove over 99% of all toxins. Additional stages can be added to soften the water by removing hard minerals, as well as anti-bacterial filters to ensure that you are not exposed to water-borne diseases and other pathogens. An alkalizer can be used to adjust the PH of the water, and you can even include a remineralization stage that will add healthy minerals that have been removed during the filtration process.

While sophisticated whole-house water filtration systems (with 7 or more stages) are expensive, more basic 3-stage systems are relatively affordable and can be sufficient for most applications. However, if you live in an area where water contamination is severe, you should consider a more advanced system with additional stages.

Filters that utilize ion exchange resin beads are a very effective way of removing chemicals, heavy metals, and many other toxins from drinking water. They work by using either a negative or positive charge to remove elements by attracting them and retaining them inside the filter.

While boiling water disinfects it by killing bacteria, viruses, and parasites (pathogens), it does not remove GenX or most other chemicals and heavy metal contaminants. The EPA recommends other types of water treatment, like reverse osmosis as a safe way of removing GenX from your water.

Brita water pitcher filters are affordable and easy to use, making them very popular for people who want to improve the taste and odor of their water. While Brita filters utilize granular activated carbon and several other filtration media, they are small and are not as effective as larger filters.

Brita filters are designed to mostly remove chlorine and small amounts of harmful chemicals, as well as heavy metals like lead and arsenic. They are not an effective method of removing GenX or any type of PFAS.

PFAS chemicals have been identified as a major problem throughout large parts of the US. While GenX only affects people living close to the Cape Fear river, these chemicals are extremely hazardous. Only a very small amount of GenX can cause serious health problems.

Whether you’re at risk of PFAS contamination in general, or specifically concerned about GenX, the remedy remains the same. You should install a reverse osmosis filtration system for your home.

If you suspect that your water may be contaminated with GenX or any other type of contaminant, you can contact your local utility company to inquire about what testing has been done and what precautions you should take. Alternatively, you can have your water independently tested to ascertain what risks you face.

If you obtain drinking water from a well, you should have it tested as you don’t have the reassurance of the mandatory testing required by utilities supplying public water. If you discover GenX or any other harmful toxins in your water, do some research to determine which stages of RO filtration are the best for removing the specific contaminants in your water.

Water filtration pitchers and many other types of countertop filters are not capable of removing GenX or PFAS in general. In order to ensure that your water is completely safe, an RO filtration system is the only trusted solution.