Most water filtration is straightforward: if you have a contaminant, you have one or two choices for treatment. However, iron is more complex. There are three types of iron contamination, and each type requires a different treatment strategy. Different methods work better for different contaminates, and they often require water with a specific pH. How do you determine which system is right for you? 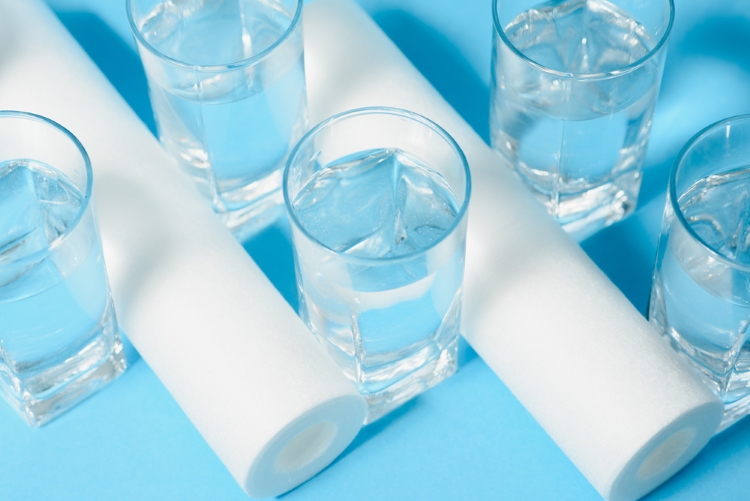 The Types of Iron Found in Water

Iron from well water shows up in three forms: ferric, ferrous and bacterial.

Ferric iron is a form of oxidized iron, the same material that makes up rust. It has a bright red or brown color in water. If you leave a glass of ferric iron-contaminated water sitting out, eventually the iron will fall out of suspension. This leaves a layer of iron sediment in the glass, while the water will be clear.

Ferrous iron is another type of iron oxide. If the water doesn’t contain oxygen, the iron forms oxides by reacting with carbon dioxide. The resulting ferrous ions don’t change the color of the water. This gives it the nickname “clear water iron.” If you let a glass of contaminated water sit out, oxygen can react with ferrous iron, turning it into ferric iron. This iron falls out of suspension, forming small flakes in the bottom of the glass.

Bacterial iron is an iron oxide formed by chemotrophic bacteria. These organisms harness energy from the reactions used to make ferrous iron. This iron leaves behind a layer of slime on toilet tanks, softeners and water filters. This slime also has a distinct smell, which ranges from raw sewage and cucumber to rotten eggs. This is often confused with sulfur contamination. This smell is more intense if the water sits for a while. It’s common for people to notice the odor when they first use water in their home after coming back from vacation, or when they open a tap that is rarely used. While iron bacteria aren’t poisonous, the slime they leave behind is a perfect breeding ground for pathogens. This slime also clogs pipes and filters.

How Do I Know I have Iron-Contaminated Water?

Ferric iron-contaminated water may look red or brown, while bacterial iron shows up as an oily sheen or a gray, brown or red slime on water surfaces. All types of iron have a metallic taste and smell, and can leave black stains on food cooked in this water.

You may discover your water has ferrous iron when you use an oxidizing agent. For example, if you use chlorine to shock well water or treat pool water, the ferrous iron turns into ferric iron. Suddenly, the water in your pool or from your taps is red or brown.

If you think you may have iron in your water, you should have it tested. Iron causes major issues above 0.3 mg/L, or 3 PPM. However, you may need to filter out smaller amounts of iron if it affects the look or taste of your water.

How Do Iron Filters Work?

No matter the filtering method, there are three principles used by treatment systems to remove iron:

These filtering principles work on most well water. However, if your water has high levels of iron, you may have issues with colloidal iron. This form of iron doesn’t have an electrical charge, so it can’t be trapped by charged filter media. A coagulant must be added to the water to clump colloidal iron together for removal. Without a coagulant, you would need a filter that works on particles as small as 0.22 microns. This level of filtration is almost exclusive to reverse osmosis filters, but RO filters can only handle small amounts of iron.

Here's how these filtering principles are put into practice in commercial iron removal systems.

Ion exchange filters, like those used in salt-based water softeners, use media that attracts ferrous iron ions. These filters have salt-saturated media. When the water passes through, the iron cations are attracted to the media, swapping places with the salt. These systems are cost effective, but they come with major limitations. In practice, these filters are only effective at removing up to 5-7 parts per million (PPM) of iron.

These filters use media that bonds with iron while ignoring calcium and magnesium. Unfortunately, this media is also more attracted to iron than salt, making backwashing and recharging difficult. These systems are also less effective at removing iron when the water has a pH above 7.3, and ferric iron can clog the filter media without frequent backwashing.

Salt-based water softeners are also able to remove iron. However, they’re limited to contamination levels up to 2 PPM. If they’re used this way, these filters won’t be able to pick up as much calcium and magnesium, so they don’t soften as well. They also need to be recharged two to three times as often to stop iron buildup in the media.

Manganese dioxide oxidizes iron, hydrogen sulfide and manganese on contact. This forces these contaminants out of suspension, so they can be filtered out. Green sand has a natural manganese dioxide coating, and has been used in filters for decades. In recent years, manufactured media like Pyrolox have entered the market. This media also has a manganese dioxide coating, but the granule sizes are finer, increasing surface contact with water. This allows for more filtration in a smaller space. Manganese dioxide media only works with water with a pH of 6.7 to 8.8, and it’s limited to filtering 15 PPM of iron and manganese, combined. It also removes up to 5 PPM of hydrogen sulfide.

An air gap system uses a media tank with a bubble of air at the top. Water is sprayed through this bubble, exposing iron to oxygen. The ionic charge of the filter media captures the resulting iron oxides.

The recharge cycle backwashes the filter media and forces the air out of the tank. As the tank fills, a valve uses the flow of water to draw in air, forming a new air bubble. To prevent rust buildup and bacteria growth, these systems usually backwash every three days.

There are several types of media used to capture iron and other oxides. In general, media in these oxidizers work best with a water pH between 6 and 9. Each type of media has specific limits on its iron, manganese and hydrogen sulfide filtering capacity.

Ozone-based systems work exactly like air gap systems, except they add an ozone generator to the top of the tank. This generator uses an arc of electricity to turn O2 in the air bubble into O3. Ozone is better oxidizer than atmospheric O2, increasing the system’s filtration capacity.

Both chlorine and hydrogen peroxide are powerful oxidizers. Like an air gap system, they oxidize iron, manganese and hydrogen sulfide, forcing them out of suspension. These chemicals also break down cells, killing pathogens and iron bacteria. The effects aren’t immediate, so chemical injection systems use a holding tank to give the oxidizers time to do their work.

Hydrogen peroxide naturally decomposes into water, hydrogen and oxygen. Chlorine is usually filtered out with a carbon filter, or allowed to off gas in a storage tank before the water enters the rest of the plumbing system. To speed up cycle times, these systems are often paired with air gap or manganese dioxide systems. Chemical injection is the best method for treating iron bacteria.