What size water softener do you need for your home? There’s no simple answer. You need to consider several factors, including water hardness, water usage, and iron contamination. You also need to balance capacity against salt usage and efficiency. Here’s every factor you need to take into account when you buy a softener, and how it affects the softener’s performance. 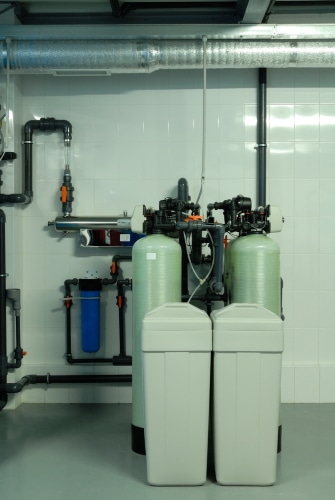 How Does Grain Capacity Relate to Softening Performance?

The maximum amount of hardness minerals the softener can absorb before being recharged is measured in grains. On average, one cubic foot of water softener resin has a capacity of 32,000 grains under ideal operating conditions. However, you aren’t going to get the perfect flow rates and use the full recharge cycles needed to achieve that much capacity.

If a softener has a cubic foot of resin, recharging it when it’s completely saturated requires 18 lbs. of salt. However, by recharging just 20,000 grains of capacity, salt use drops to just 6 lbs. By buying over capacity, you save wear and tear on the system through fewer regeneration cycles, and cut salt usage significantly.

Plan on buying a water softener that only needs 65% of its rated grain capacity to soften your water. This reduces regeneration cycles and salt use, while giving you the extra capacity needed for usage spikes. The same goes for water conditioners. While they don’t need to be recharged, their grain capacity rating is an equivalent to a salt-based system.

How Much Water Softener Capacity Do I Need?

With a salt-based water softener, you want the recharge cycle to run an average of once per week. Here’s how you figure out the rating in grains that you need for your softener.

Find out how the hardness of your water in GPG.

If you want to remove iron with a salt-based water softener, add 3 to the hardness GPG.

Multiply the number of people in your household by 525. This represents the gallons of water the average person uses in a week.

To find out the capacity you need, divide the number from step 5 by 65, then multiply that number by 100. This gives you the buffer you need to ensure your softener is operating at an average 65% capacity.

For example, let’s say you have water with a hardness of 6 GPG, no iron, and four people living in your household.

In this case, you want a water softener with a 20,000 grain capacity.

What is Hard Water, and When Do I Need to Treat It?

You can find out how hard your water is by getting an at home hardness test, or by sending a water sample to a lab. If you choose to do the testing yourself, you need to be careful handling the test strips to get accurate results.

The strips must be kept in a water-tight container, and your hands must be dry while performing the test. After the strip is exposed to your tap water, it changes colors. Match the color of the strip to the included chart to determine the hardness of your water.

When you’re shopping for a water softener, you’ll see performance rated in grains per gallon (GPG,) while test strips often rate hardness in parts per million (PPM.) 17 PPM is equivalent to one GPG. Hardness is divided into four main categories:

If you have moderately soft water, you may notice some skin dryness and have minor problems with soap scum and hard water deposits. If your water’s harness is above 7 GPG, you’ll start noticing plumbing problems, especially if you have a tankless water heater. This is also the point where UV water treatment systems are less effective.

If you have very hard water, your plumbing and appliances will deteriorate rapidly, while removing mineral deposits around faucets becomes a major chore. At this point, it’s not just about having cleaner water. You will easily recover the cost of a water softener through decreased repairs and replacement of appliances and plumbing.

Most hard water treatment systems use one of two methods to deal with minerals: ion exchange or nucleation.

Water softeners use ion exchange to remove hardness minerals. The media in the resin tank is saturated with sodium or potassium chloride. When water passes through this tank, calcium and magnesium ions swap places with this salt. Eventually, there’s too little salt in the tank to push this reaction.

The tank goes through a recharge cycle, which draws in brine from a separate tank and flushes it through the resin tank. This reverses the process, absorbing calcium and magnesium while resupplying the media with salt. This hard water brine is flushed from the system. These softeners are banned in some areas due to concerns about salt pollution.

Ion exchange also picks up other minerals, including iron. In fact, the salt ions are most attracted to iron, removing this metal before it removes anything else. This limits the exchanger’s capacity for hardness minerals.

Water softeners can be used to remove up to 1 GPG of iron. If you have more iron in your water, you need to use an iron remover before passing the water through the softener.

Water conditioners use crystallization to deactivate hardness minerals. The media in the conditioner tank acts as a nucleation site. Once a calcium or magnesium ion latches onto the media, other ions latch onto that ion, forming a crystal.

Eventually, the crystal becomes too big to hold onto the media and flakes off. Technically, the water is still hard. These crystals don’t bond to pipes or leave behind soap scum. However, they still react with soap, so you’ll be using as much soap and detergent after installing one of these filters as you did without one.

Water conditioners can become saturated with iron, destroying the media. If you have any iron in your water, you need to remove it before the water reaches the conditioner in your treatment system.

Water conditioners also generate small carbon dioxide bubbles as part of the crystallization process. These bubbles remove built-up limescale on pipes. This makes your water harder than normal for a few weeks as this scale is washed out.

Once this process is complete, you’ll have have clean pipes and a better flow rate through your plumbing system. Since there’s no brine tank, conditioners require no maintenance. However, the nucleation media only lasts 5 to 7 years.

Yes, but they’re usually not practical. Electric descalers charge hardness mineral ions, so they won’t stick to plumbing. These are common in industrial settings dealing with huge volumes of water. There are household descalers available, but most of them are too small to be effective.

A few inches of copper winding is enough to ionize minerals going to a single appliance, like a clothes washer. However, it takes several feet of copper cable to charge the water going through your home. If your water is hard enough that you need to keep it from damaging your appliances, you’re better off going with an alternative method to treat all of your home’s water.